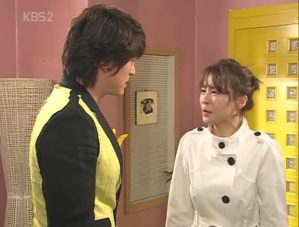 Hye-chan tries to piece her life together, but it’s doubly hard with the memory loss and the teenage angst to go along with it.  We also have another nod to that other famous memory-makjang opus, Winter Sonata.

Sang-young hustles a crying Hye-chan off the stage at the director’s party.  In the ensuing confusion, he loses her in the crowd.  Sang-young makes it home, but she’s not there. She ends up walking the streets, remembering her mom’s words.  Lost in thought, she gets accosted by a drunken idiot who tries to paw her.  She gets rescued by her friendly neighborhood high schooler Kim Noon, and he carries her on his bicycle to his tutoring academy. 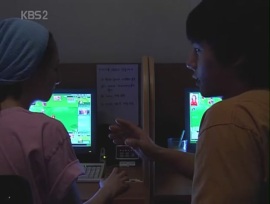 Hye-won and Bong-kyu are in a friendly computer game competition at a jiljimbang – are there a few sparks there? No, just an arm smack-down for the loser. (The background song is “From The Beginning” from the Winter Sonata OST).

At the academy, the stalker girls look for Kim Noon, but he’s up on the roof with Hye-chan sharing anecdotes and song lyrics.  Cinderella-like, she gets away from him again, and he ends up on the sidewalk with no Hye-chan in sight.

When Sang-young shows up at her apartment, Hye-won berates him for thoughtlessly telling his wife about their mother and losing track of her. During their heated discussion, Hye-chan shows up, but refuses to leave the apartment with Sang-young. 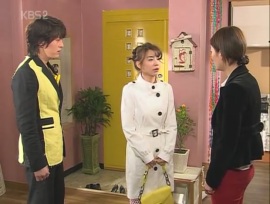 On the set the next day, the Director scolds Sang-young for being less than enthusiastic about the scene they are filming, which happens to be the engagement proposal.  Ji-young quips that if they keep getting NG’s, the crew may suspect they have feelings for each other.  The joke falls flat to an awkward silence, until Manager Ahn shows up and tells Sang-young he got an film offer from the director at the party.

Hye-chan is cleaning up her sister’s academy, much to Hye-won’s disgust, but she doesn’t want to be a burden at home.  On another thought, she goes to the prosecutor’s office to claim marriage under false pretenses, but since she can’t remember when and it’s been at least three years, he suggested a divorce attorney. 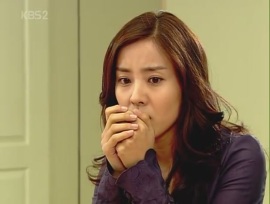 She decides go visit Sun Mee at the studio, but bumps into Ji-young.  Ji-Young convinces her to sit down at the company canteen and chat.  Naively, Hye-chan spills the beans on everything; the amnesia, the strain between Sang-young and her, and her wish to break up with him.  Ji-young excuses herself for some alone time, mulling over the possibilities to further her own relationship with him.

When she leaves for the day, she bumps into Sang-young, and admits to knowing about Hye-chan’s amnesia and hinting that reporters have been talking to her about him and his wife.

At home, Sang-young bumps into Hye-chan heading out the door with her clothes (they look like two colorful tropical fish in the same bowl).  She isn’t willing to stay at their house, but he guilts her into agreeing to hypnosis therapy to possibly bring back her memories.

The memories are from her twenties, and consists of her and Sang-young sharing a motel room [snerk!].  When she wakes up, she calls him a beast and runs to the dukbokki halmeoni to complain about what happened.  Grandmother just shrugs and says it’s what married people do, and tells her that separating is the cowardly way to handle relationship problems.

Kim Noon is thrilled to see her at the dukbokki shop, and she returns his gym clothes when they leave the restaurant.  He throws the puppy eyes at her, but she brushes him off in her quest to find employment. 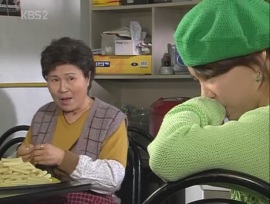 She starts out at washing cars at a dealership, never suspecting that Kim Noon followed her and secretly helped her out.  At the end, he sees her yelling at the bus stop, and runs to protect her, only to find out she’s yelling at a poster advertisement of a well-known actor (Sang-young, of course).  They eat ramyun together at a storefront grocery, and he shares his noodles.  Hye-chan sees a sign for a Youth Film Institute contest, and gets the idea that the two of them can send a submission.

Sang-young arranges dinner with the two sisters, but only Hye-won shows up; Hye-chan refused due to her part-time job.  As luck would have it, Ji-young and her aunt also show up at the same restaurant, and they perform introductions, but are delibrately interrupted by Hye-won.

After dinner, Sang-young remembers Halmeoni’s dukbokki shop and impulsively stops by.  He picks up some spicy rice cakes for his wife, and learns that she had recently been there; however, when arrives at Hye-won’s house, Kim Noon is just saying goodbye to Hye-chan.  Sang-young is poleaxed as he watches them, then turns around and goes home.

Hye-chan opens up her mail that she picked up from the house, and is horrified to find an invoice for 13 658 780 W.  Hye-won, seeing this a perfect opportunity for a reconciliation, frightens Hye-chan with stories of fraud, police, destroyed credit ratings, and broken destitute families.

Sang-young eats one of the loneliest meals ever, dukbokki for one, and then pays the ultimate price with a little (or indeed a big) bathroom break. 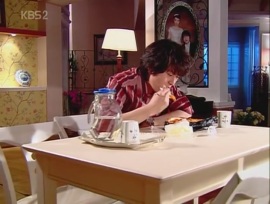 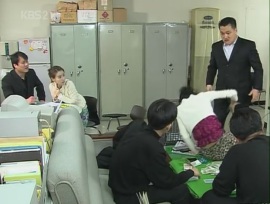 Hye-chan does that KDrama standby and visits a loan shark.  They are interrupted by a deal gone sour, and she decides discretion is the better part of “oh snap” and runs out of there.  While thinking about her next move, she gets a frantic phone call from her sister that her husband has collapsed.

After the doctor says he just needs rest, Hye-chan gets ready to leave the house.  Manager Ahn and Hy-won tag team her into agreeing to stay at the house to help Sang-young get better.  She grudgingly serves him porridge, and they negotiate.  Sang-young will pay the invoice, and Hye-chan will cook and do the laundry, but he has to stay out of arm’s reach after 9pm.

During breakfast the next day, Sang-young asks her to get memorial day food for that evening.  Not knowing who else to help her, she spends the day food-shopping with Ji-young, who uses the time to make subtle digs about her knowledge of Sang-young.  At the same time, the Dictator is fretting that Sang-young and Hye-chan haven’t made it to the house. Grandma and Bog-kyu are polishing the memorial plates, while the couple drive their way to the elder’s house. 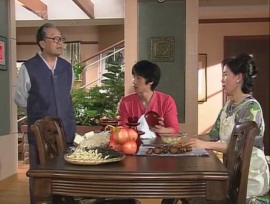 It’s the memorial day for Sang-young’s father, and the grandparents notice right away that Hye-chan does not appear to be herself.  They deflect Grandma’s questions – though she speculates that maybe Hye-chan is pregnant – but the Dictator’s pointed comments to Sang-young rapidly devolve into an intense argument between them.  Hye-chan is shocked, and Bong-kyu escorts her out of the line of fire.

We get more backstory to the family dynamics: Sang-young’s mother, who was also an actress, attempted to abort Bong-kyu using drugs, causing his congenital deafness, and then abandoned her two sons and disappeared.  This, of course, is all news to Hye-chan.  Grandma and she decide to stay overnight to help defuse the situation, and the couple end up together in a guest room.

They play the who-gets-the-bed-who-gets-the-floor game, but they both end up under the covers when the Dictator checks on them.  They end up face to face just inches apart.

Final flashback scene shows what really happened in the motel room in their twenties: Hye-chan got drunk with Bong-man after breaking up with Shi Woo. He had gotten the motel room to clean up after she threw up on him, and  she ended up forcing a drunken kiss him.

We now see that our canon couple both have  parental abandonment issues, although for different reasons, as well as similarities in their prickly personalities and the interest in the entertainment business.  You could see Hye-chan softening a bit when she heard the family stories, and, as her understanding grows, her attraction to Bong-man / Sang-young will grow, too.

I have a great fondness for chocolate chip cookie dough, 80's science fiction movies, and thunderstorms.
View all posts by Shukmeister »